November 4th is not only the day to say “Happy Will Rogers Birthday!”—yes, there is a physical as well as a philosophical link there—but this year it’s the 20th anniversary of DS9‘s delightfully and awesomely monument anniversary homage show, “Trials and Tribble-ations.”

Now this is a valentine to fans. I mean, it’s pro-Trek’s own fan film, is what it is.

Look, even if you’re not a DS9 fan or even an original series fan—you must get  familiar with this episode. It’s the “Charlie Brown Christmas” of Trek that transcends everything else … and when it was made, I dived in to do a two-day set visit for the best bits for a TEN-page feature for the official Communicator magazine (before I was editor)… and wound up helping make a little history myself.

In fact, I’ve long said this was the most effortlessly fun writing project I’ve ever had—it’s both a diary and an interview digest. That shoot was simply a magical time ..as magical as the final episode preserved on film turned out to be.

Sadly, none of the custom photos I took were used on deadline for the spread, but you can still see and read these original PDF pages here, via my site: 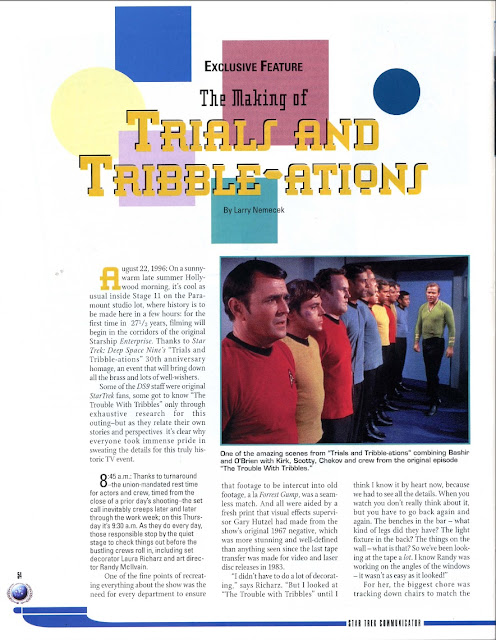 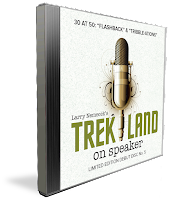 What’s more, this year’s Trekland: On Speaker Vol. 5 “30 at 50” featured my remastered stage visit to “Tribble-ations” (as well as “Flashback”), and there’s even more good background there—in 17 of the actual voices, from 1996. It’s a great anniversary year gift! The new online order page is coming with the new site in a matter of days, but for now…

When I am live at conventions, as with Northeast Trek Con or Starbase Indy, you can grab one from me there.. as you could since its debut at STLV.

Here’s the back cover: 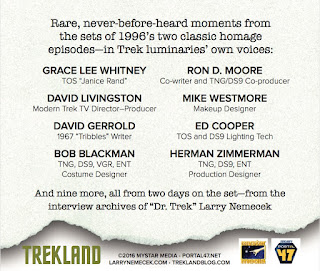 Powered by Rapidology
2021 Lower Decks giveaway
Sign Up for Updates (and get a free download!)
Welcome to Dr. Trek’s new world of online backstage Trek fandom!