Exactly 10 years ago today, and this week, I checked off one of the biggest bucket-list items of my life: Finally, visiting the crash site on Alaska’s far north coast — “the top of the world”— where my hero and America’s greatly missed witty-wise folk commentator Will Rogers lost his life in a freak air crash on vacation with pilot Wiley Post.

It had been “Barrow” since early territorial days, but while the peninsula tip is still Point Barrow the nearby town has in recent years reverted to its native Inupiat name,Utqiagvik (“UUT-kee-AH-vik“) . Otherwise, my thoughts from that day on location — reprinted here from my legacy blog — are all still very much with me. As well as a follow-up five years later.

Meanwhile, yes—I’m still a proud docent at Will Rogers State Historic Park—and would love to lead you on a ranchhouse tour some Sunday….when we are all back open again.

Most of all, you may ask: why mention Will in my Trek doin’s? Read on.

Trek 2 Will: Thoughts from Barrow 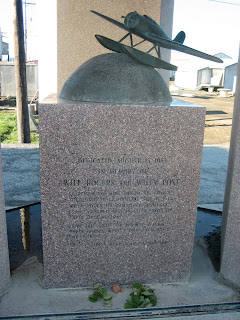 For it was here on the Arctic Ocean coast, this northernmost point of all America, where Will Rogers—and aviation pioneer Wiley Post—died in a freak plane accident on Aug. 15, 1935.

What does that have to do with Trekland?

Well, it’s only been the last couple years that I have figured out that very question for myself. And it’s a much firmer connection than Star Trek IV, where the Earth “landing” of the Bird-of-Prey “HMS Bounty” was actually on Will’s polo field at his Pacific Palisades ranch, now a California state park where I am a docent.
Yep, I’ve about decided part of the appeal for me personally is that Will Rogers was Star Trek before Star Trek was cool —much less invented.

How so? Well…pick your favorite angle from Gene’s universe:
—You want exploration? Will pushed the wild blue yonder, nagging locales to build airports and nailing the Feds for an independent Air Force. And his globe-trotting amounted to three orbits of the world over his 55 years, beginning in his early 20s : the Far East, Latin America, Europe, Africa, and twice across Soviet Russia.
—You want IDIC—“Infinite Diversity in Infinite Combinations”? Will, a quarter-blood Cherokee who grew up with the kids of former slaves, says: “We will never have true civilization until we learn to respect the rights of others.”
—You want the Prime Directive? Will says: “When you get into trouble 5,000 miles from home, you’ve got to have been looking for it.”
—You want gadgets? Will could “duct tape-‘n’-baling wire” anything together, but he’s the one with the surround-spray nozzles in his 1930 shower, or the hand-crank “hurdy-gurdy” piano music box in his home.
—You want a thirst for knowledge? Will had a pull-down classroom map set mounted over his desk, besides his book library; he would have been the first guy on his block with a modem, if he’d lived to the 1980s.

Throw in the fact that Doctor McCoy is about as sage and keen a country wit as Will is—and that he and De share the same big, friendly, lined smile—and the link is complete. Suddenly, all is clear. I need no longer keep my two loves separate from each other any longer. 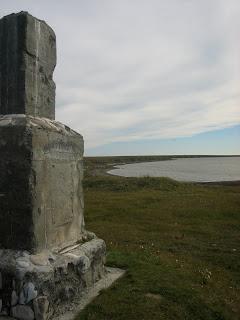 Not only that, but I knew Will invented both the “nightly monologue” on timely topics, and the concept of a “goodwill ambassador.” But now it hits me: Will started his little “Daily Telegram” of 1-3 paragraphs in 1926 in over 600 newspapers. He was the original blogger!
And here in Barrow, site of the world-stopping death of Aug. 15 that was every bit the shock of Pearl Harbor or JFK or 9/11 in its day, we ask the old question once more:

Oh, Will, where are you when we need you today?
And with that, the follow-up thought is not far behind: Surely, there has to be a new name out there someplace to fill that all-in-one, irreplaceable gap… and boldy go where only Will has gone before.